Here’s something with a slightly different spin to it.

I play Malifaux (well I do when people I know aren’t working over in Japan), and I’ve really started collecting since I started getting games in.

To date I own three Ramos (original, alternate and plastic) type crews, somewhere Nicodem has gone hiding, Pandora (plastic), Marcus (metal), Misaki, Yan Lo, Dreamer, this is just to name a sample (and names are currently hiding with Nicodem for the ones I’ve got that I’ve not mentioned yet).

My most recent acquisition is the Viktorias Hired Swords plastic box.

It’s stuff like this that reminds me of just how much plastic can be used to make.
Well once you get over the limitations of steel die-casting not being able to produce things like undercuts. 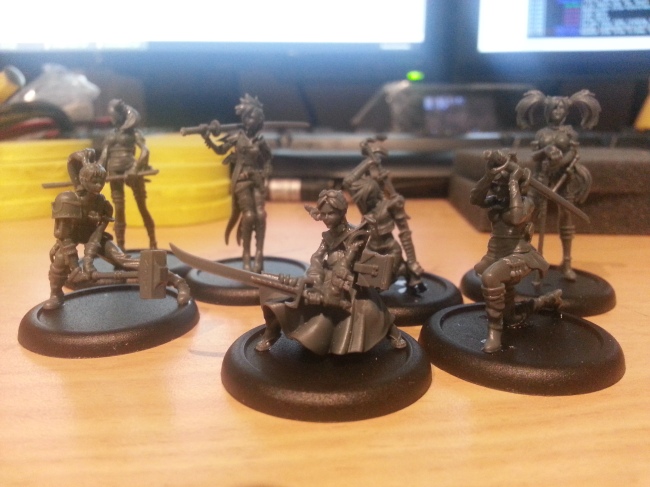 Keeping in mind this is not an ideal miniature photographic setup and that I’ve got a bit more cleanup to do prior to painting.

Most of this stuff went together, well other than a lack of tolerance with the pieces, some of them being rather fine (seriously hands tend to end up separate with malifaux at the 30mm scale) and the Student of Conflict’s braids snapping in half with no real application of force (she’s the one front and centre).

The reason I called this a miscast box is for something that seems utterly hard to comprehend happening in a box containing parts purely designed on computer and then directly laid out on sprue.

I write of Ronin 3’s left arm. She’s the one on the back left, and it was bizarrely wrong.
To put it simply, the shoulder was reversed.
If attached as it was, the arm would more or less be broken with the elbow facing the wrong way.
Not only that but it would end up pointing away from the left hand in a way that even the resurrectionists would be ashamed.

It’s a little disappointing that I had to sever her arm at the shoulder, then turn it around and re-attach it.
With operations like that when flesh and cloth are involved you have to be really careful to make sure everything lines up right.
Can’t use a pair of side-cutters either, those gouge out way too much material.
Carefully with a scalpel I cut around the edge of a band on the upper arm and accomplished this without making it look like she’s horribly deformed.

What I’m trying to say is this, when you’re paying a premium price (ok, so significantly less than games workshop level) for something designed and laid out on computer and mass produced with all the associated images based off the same original 3d model used to generate everything from artwork to instructions, having a part be quite simply wrong is really disappointing.

The consumer shouldn’t have to fix an issue directly out of the box with anything, especially if all the rest of it is perfect.

All I can say is it would totally suck for a regular gamer to have to deal with something like that.

And thus ends my first Malifaux post of any real note on here.

One thought on “Hireds Swords – The miscasts box.”