So the Windows 10 Technical Preview just got released this week.

Being somewhat skeptical about how it would handle naturally I had to get my hands on it.

Up until today I’ve been running 8.1 Heavy Edition on that drive, and what better way to confirm how things function than to migrate directly to 10.

Quite simply the process was pain free.

I copied the iso over to USB, I ran the setup.exe and away it went.
I spent some time changing water in my fishtank during all this, about 5 buckets worth to give you an idea of timeframe.

Eventually it got to the point of asking me to log in, and I was finished.

Pretty much all my drivers and motherboard software still function, though App Center is chucking a fit with “This Driver can’t release to failure!”

Straight away I fired up my x11 miner and then switched over to remote desktop to really play with it from the comfort of my main win7 system.

Seriously I’m liking it so far.

Whilst it seems fairly solid at this point, I stress only try it out on an alternate system like me, things are bound to not work quite right or break and just change a lot over time.

So enough of that, here are some basic screen-caps.

Music and mining, what more could you want? 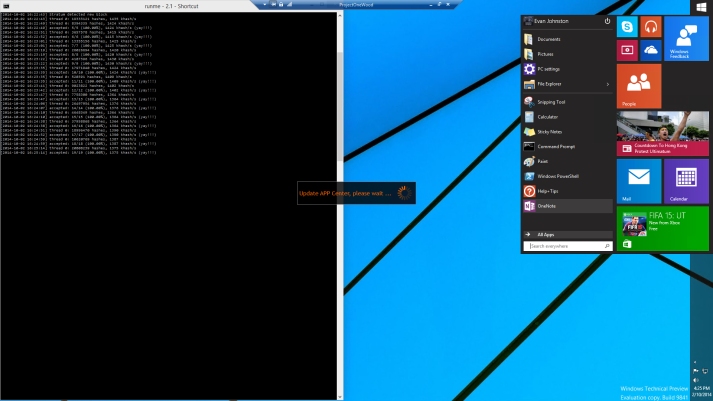 Mining and new start menu, yes I like to place the taskbar on the side.